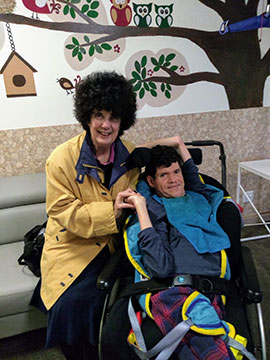 Tricia O’Keeffe may claim to be “just an ordinary person”, but to the Faith and Light communities she has been a part of, Tricia remains a joy-filled and dedicated advocate for those living with an intellectual disability, their families, carers and friends.

Tricia comes from a large Catholic family in Geelong. Her younger brother Danny, who is now 52, has cerebral palsy. Since he was a very small child, Tricia’s family has been very dedicated to ensuring his involvement in the local community, as well as within the Catholic family.

After her schooling, Tricia undertook librarianship studies and moved to Canberra in the 1970s, taking up a position with the National Library. On the very first Sunday she arrived in the nation’s capital, she joined a young adults group which had just been started by Fr Mick Burke at St Christopher’s Cathedral Parish. The group met for coffee after the Sunday night Folk Mass, and there was always a great sense of encouragement and commitment from Fr Mick and the core team.

Soon after, Tricia convinced Fr Mick and a few others that a coffee night was needed at the local Macquarie Hostel. Tricia realised that some of the residents at the hostel probably didn’t have too many friends and this would be a good way to get to know each other.

Solid friendships formed during this time at St Christopher’s. Such was the bond that in the years that followed, five members, led by Sue Gordon, approached the Archbishop for permission to form the St Joseph’s House of Prayer at Goulburn.

Tricia’s plans to move into the House of Prayer community were short-lived when her mum became very ill and passed away. Tricia moved back to the family home in Geelong to help her dad care for her younger siblings. After 11 years, she headed back to New South Wales to pick up where she left off. And after a stint of five years in Goulburn, she took a job with St Paul’s International College in Moss Vale, working as a librarian and in the boarding house.

During this time, Tricia became involved in the ecumenical group dedicated to the spiritual needs of people living with an intellectual disability: Faith and Light. This was not the first time Tricia had experienced this group. When she had been in Geelong, she recalled the Melbourne group would come out to their town and invite those living with a disability to their monthly gatherings. Tricia joined the Goulburn Faith and Light community, and then continued on in Bowral.

Tricia’s involvement with Faith and Light became very much a part of her life in the following years. While living in the Southern Highlands region of NSW, she encouraged friends to help her transport members of the community from their group homes to Sunday Mass, allowing the members to become involved in their parish.

Tricia undertook further studies through the Diocese of Wollongong. This allowed her to be a catechist, especially for children with special needs who were preparing for the sacraments. She continues to be involved in this ministry. Her passion for enabling people living with a disability to receive the sacraments was very much driven by her frustration at seeing her own brother have to wait until he was 21 to receive his First Holy Communion.

Tricia was also invited onto the Bishop’s Committee for People with Disability and their Families, representing Faith and Light in the Diocese of Wollongong. She became involved in planning and policy work and collaborated with clergy and the laity so as to make it easier for parishes to integrate those living with a disability into the community. Highlights from these years included the celebration of the Diocesan Disability Awareness Masses.

As retirement age drew closer, Tricia felt that she would like to return to Geelong, even though extracting herself from the Faith and Light community in the Bowral area was difficult. As she was settling back into her home town, she noticed that the parishes were holding discussion nights related to the Plenary Council. At the very last of these meetings held in Geelong, Tricia made it along to one of the discussion sessions. 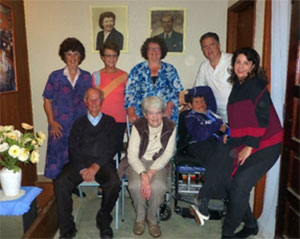 It was here she met Kevin Mark. Kevin is very much involved in parish life, as well as prison ministry. He was facilitating the night and asked Tricia if she had any good ideas about enlivening the parish. Well, as the saying goes, “from little things big things grow”.

Tricia mentioned that she thought it would be a great idea to start a Faith and Light group in Geelong. Kevin agreed. He thought that this was something practical and that it would respond to the strong desire for the Catholic Church to be more welcoming and inclusive.

COVID-19 has slowed their progress towards formalising the Faith and Light community, but the initial gatherings have been wonderful, says Tricia. These days, it is not only the families of people living with a disability that get involved in the community, but also the carers, as they are often the people who bring the participants along.

Tricia says that it’s not unusual for some carers to be very hesitant about the gatherings, but this way of being community really opens their eyes to what it means to live a Christian life. She says there have been beautiful times when the Holy Spirit has given her the right words to speak about her faith when asked questions about Catholicism.

I asked Tricia if she could name one challenge and one joy she sees in our Church. Tricia acknowledges that while advocacy for those living with a disability has certainly improved in recent years, she looks forward to a time when they would also be welcomed into the sacramental life of the Church without hesitation. As for joy, Tricia loves being a Catholic, especially the community aspect of the faith where she has found supportive clergy and friends.

As for a single moment of joy, she emotionally recalls Pope John Paul II’s visit to Australia in 1986. They had travelled to Melbourne for the Mass, and at the very last moment an usher came down and asked if Danny, in his wheelchair, would like to sit in the sanctuary area with the Pope. It still makes her smile!

As our time together comes to an end, Tricia asks if she could share a few words from a Faith and Light International booklet (Guidelines 2020-2021). Let me leave these words with you.

For more information about Faith and Light:  www.faithandlight.org/

Pictures:  Tricia O’Keeffe (with Danny and her family)